Stoic philosophers in antiquity held that ‘the world … is like a city and a polity’, and that the nature of humankind is like ‘a code of civil law’ (Cicero, De Finibus III 62–67). 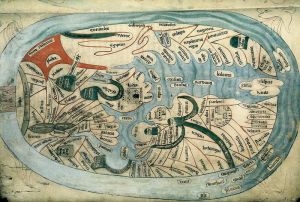 In his late-antique text, De Natura Hominis (ca. 390 A.D.), Nemesius of Emesa rejects a number of Stoic tenets. His world city is not theirs. Furthermore, Nemesius criticizes aspects of the Platonic world city as it is sketched in the Timaeus, and in a rich vein of post-Platonic texts and commentaries. Nevertheless, I will argue here that the 4th-century Syrian philosopher-bishop – like the Stoics and Platonists – held that the human person is a natural-born world-citizen who is in communion with the whole of creation, and indeed, with the Demiurge (since humankind is, as Nemesius says, a ‘child of God’).

This is why Nemesius opens his De Natura Hominis with an elaborate description of divine creation as a form of οἰκείωσις, and why his text ends with a closely reasoned defence of divine providence as a form of διοίκησις.

It is the idea of a ‘world city’, I claim here, which gives structural and conceptual unity to Nemesius’ De Natura Hominis – a unity which his 19th and 20th-century source-critical interpreters failed to recognize.